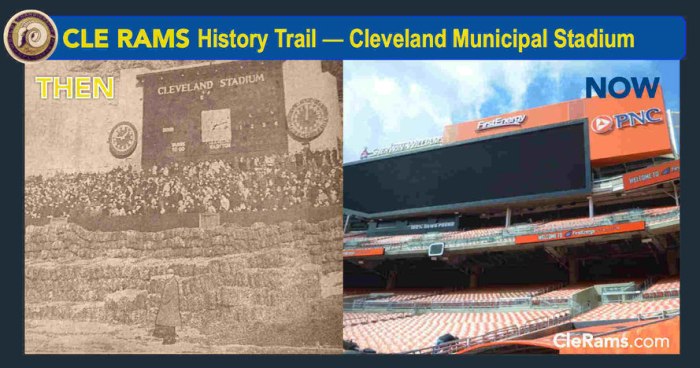 Why: The Rams won the 1945 NFL Championship Game here 27 days before owner Daniel F. Reeves announced the franchise was moving to Los Angeles.

What: From their American Football League debut in 1936 through the 1945 title game, the Cleveland Rams played 20 of their 41 home games here. Much like the baseball Cleveland Indians of the era, the Rams toggled between Cleveland Stadium and League Park—treasuring the potential for a larger gate at the former (78,000 capacity) but comfortable with the intimacy of the latter (23,000). The Stadium was the natural choice to host the 1945 title game, yet only 32,178 fans shivered through near-zero-degree weather to watch the Rams down the Washington Redskins on a patchy field insulated with 9,000 bales of straw. Precisely 50 years and one day later, the Cleveland Browns played their last game at Cleveland Stadium before moving to Baltimore, and the structure was razed soon thereafter. Today, no recognition of the Cleveland Rams or the history of Cleveland Stadium exists anywhere on the site.