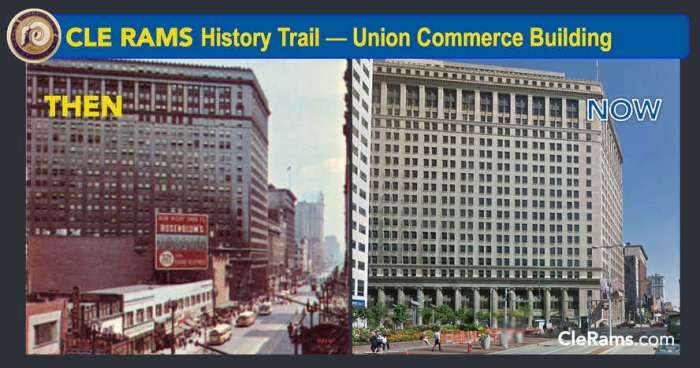 Why: Business operations for the fledgling Rams franchise rotated around this commanding building at Cleveland’s business crossroads: East Ninth Street and Euclid Avenue.

Now: Still located at 925 Euclid Avenue, Cleveland, the edifice is now known as the 925 Building (and coincidentally was on the route of the Cleveland Cavaliers’ NBA championship parade in June 2016).

What: Rams co-founder and lawyer Homer H. Marshman amassed paperwork pertaining to the new franchise in a “neat and orderly folder” in his desk drawer while working from an office here in 1936. New Yorker Daniel F. Reeves operated out of this location on his infrequent trips to Cleveland after he bought the team in 1941. And it was from here that Rams general manager Charles “Chile” Walsh conducted scouting and recruitment efforts during World War II that ultimately built the franchise’s 1945 NFL championship team and the franchise’s greatest sustained stretch of football success to this day.