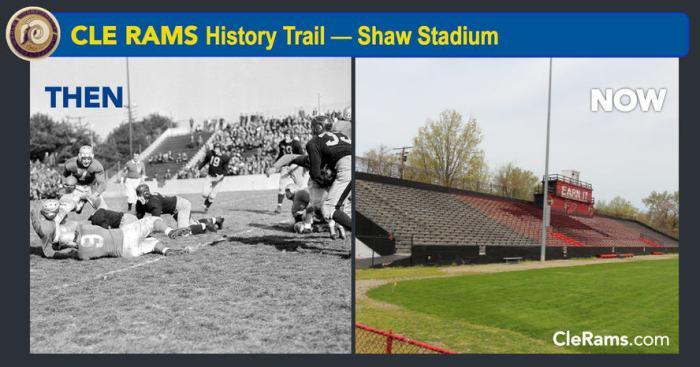 Why: The Rams hosted two regular-season games here in 1938

Now: Still located at 14305 Shaw Avenue, East Cleveland, though now painted in the black-and-red of the Shaw High School Cardinals rather than the white of 1938

What: Nothing seemed to better symbolize the Rams’ futility in their early years than their sharing of Shaw Stadium in East Cleveland, if only briefly, with the Shaw High School Cardinals. Yet the Rams’ decision to host two games there in 1938—a 7–6 loss to the Chicago Cardinals on September 17, and a 21–17 victory over the Detroit Lions on October 2—made some sense. Shaw Stadium just had been renovated and enlarged and was lavishly maintained, off limits to high-school practices but available for game-day use by colleges and other high schools. The stadium furthermore was among the best illuminated in Ohio, its lighting designed and installed by General Electric, whose NELA Park, one of the nation’s first planned industrial research facilities, was just a mile-and-a-half away. And its 15,500 capacity was well suited to the team’s small but growing fan base. But by October 9, 1938 the team had returned to the fifty-percent-larger League Park for a stunning 14–7 upset of the Chicago Bears, and the Rams—and NFL football—never returned to Shaw Stadium.