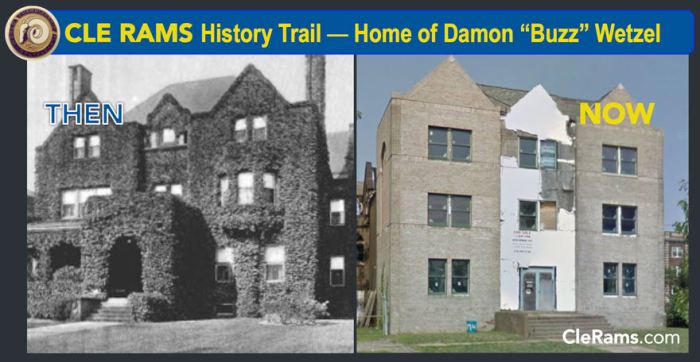 Where: Home of Damon “Buzz” Wetzel

Why: The true founder of the Rams franchise lived here while coaching the team in its inaugural season of 1936

Now: A semi-rehabbed but abandoned residence at 7609 Euclid Avenue, Cleveland

What: The founding of the Rams usually is attributed to lawyer-businessman Homer H. Marshman, and indeed it was at Marshman’s house in the exclusive Cleveland suburb of Waite Hill that funding was lined up to launch the team in the American Football League in 1936. But it was young Damon “Buzz” Wetzel—barely out of The Ohio State University, son of a Cleveland Indians scout, and with one season under his belt as an NFL player for the Chicago Bears and Pittsburgh Pirates (now Steelers)—who prevailed on Marshman and other Cleveland moneymen to invest. Wetzel recruited future Hall-of-Fame coach Sid Gillman to play for the Rams, became the team’s first head coach, and served as its general manager when the team entered the NFL in 1937. In 1938 he was pushed out by many of the same investors he had brought in and never worked in the NFL again.

Newsroom of the Plain Dealer  >>